A year ago today…

It’s amazing how self absorbed one can be, especially when an “achievement” is involved.   I am, of course, referring to our team’s stellar performance in yesterday’s half marathon. Well, yes, OK, OK, in a bit of the half marathon, to be precise.

Although much has been happening today here in Delhi, to be honest I have hardly paid any attention to anything other than a constant stream of messages and updates from all the other ladies with whom I trained and ran.  We have tracked down our finish line photos.  We have downloaded our online certificates. And we have all, I suspect, basked a little in our group/individual glory.  We all feel very pleased with ourselves, I suspect.

I remember feeling the same kind of self-absorption when I came back from Mentok Kangri, so I do know that normal service will soon be resumed, and that I will get caught up in the daily news and happenings, but for today, at least, there’s a certain feeling of detachment. 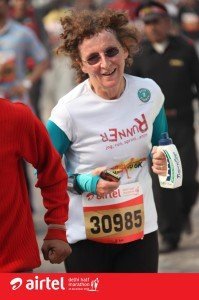 That’s it.  Boasting over and done with.

There is, however, one thing today that cannot be avoided nor overlooked.

A year ago today, December 16th, a young 23 year old woman was brutally gang-raped here in Delhi, violently sexually abused, brutally injured, and she was to die a few days later from her horrific injuries.

I have just reviewed my posts from a year ago, and the one thing that frightens me is the number of rapes and attacks that I blogged about, and about which one has subsequently heard nothing at all.  As in nothing. No follow-up on either the victim nor the rapists. No news of convictions.  Nothing.  If you can bear it (they make for grim reading) just pick out any of my posts from late December 2012/early January 2013 and you will see what I mean.

And I have patently failed in my job as a blogger, because despite my outrage at the time, I failed to follow up and raise whatever stink one woman’s anger can do.  How shamefully quickly one forgets.

And as if to mark the anniversary of that cold foggy night a year ago, today is the first proper foggy day of the winter.

All year long, ever since that poor girl was raped, the press have used a pseudonym for her (“Nirbhaya” which means fearless) even though her real name is known.  Can’t we start using her real name now, at least, as a sad little form of tribute?

The only thing I can think that has changed since last December is that at least sexual attacks and sexual abuse are now well and truly out there as subjects to be discussed.  There is none of the coyness that was there before.  It is tragic that this may well be the only major change since last year…

Well, that was one heck of a tamasha (and the marathon wasn’t bad, either)

And another item on the bucket list gets ticked, though whether or not a mere 6km segment of a half marathon counts is a moot point.

But moot or not, today was great fun.

Not great running but great fun, and we always knew that would be the case.

When you enter a race category which has a reported 18,000+ participants, there is obviously going to be precious little space to run, and that was indeed the case at first, with many, many corporate groups with banners and flags and matching baseball caps and all the attendant hoopla.  I have the sneaky feeling that a lot of all this corporate participation is to tick the CSR box, but maybe I am being unduly harsh.  As it was, many of these good folk did, as I had been told, peel off within the first kilometre –  some of them way, way before that.  But even so, the road was crowded, people ambled along, they stopped to buy peanuts, or an ice-cream, they stopped to listen to music, they stopped to take a zillion selfies –  and we nerdy runners of our brilliant Couch to 6 km group were eager-beaver-ly wending our way through the throng, trying to run, dammit.

Take a look at the kind of crowd at the start.  Lots of chanting, not much space to run :

I had great fun, but the organisation was pretty shambolic.

Instead of having staggered departures, all 18000+ of us set off together, which meant lots of pushing and shoving as we all tried to get down one corridor towards the official start line.  Not that I ever actually saw the start line, as we were pushed along by the crowd, me holding tightly onto the hand of the youngest member of our team, 13 year old Shaivi.  I was terrified of losing her in the crowd, but we held hands for lots of the time, and ran together, and finished together, the oldest and youngest member of our team, which had a nice symmetry to it.

This was in the holding area before the start, with part of my rowdy gang of girls – all of us first time runners :

This was, I believe, the start line.  As you can see, we are virtually at a standstill :

1) Well, the sheer buzz and noise and energy at the Jawarharlal Stadium were pretty amazing.

2) We ran past the Sai Baba temple, where there are always cripples and beggars outside.  Always. There was a poor man sitting on the kerbside, no legs (one was non-existent and the other was a withered, mutilated stump) and there he was with his smartphone filming us as we ran past.

3) As Shaivi and I crossed the finishing line, there was definitely a great sense of achievement.  Not for the 6km covered, since we run more than that at our Jahapanah training sessions, but the fact that for the first time I ran 5.9km non-stop.  We reckon that we both slowed down to a brisk walk 2x 50 metres, tops, so despite the crowded conditions, I ran better than ever before.  We gave each other a sweaty hug and then went to find our post-race snack –  an apple and a packet of biscuits.

Here are a few moments.  First up, group photo : 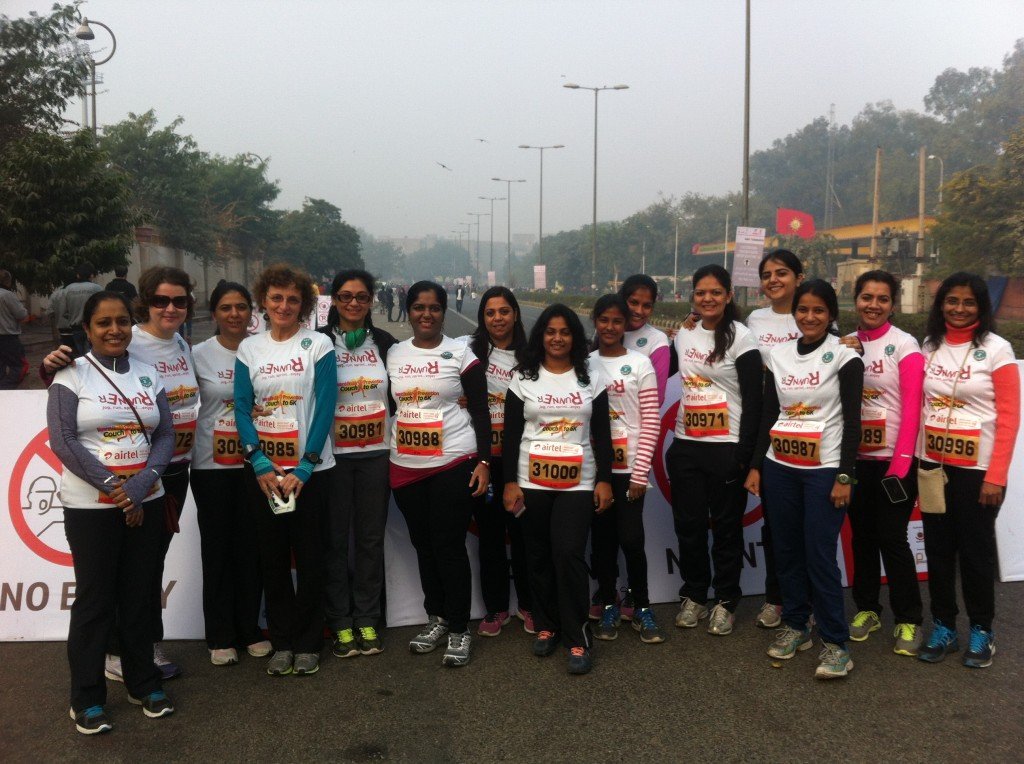 Below, you have our team Women’s Health logo… 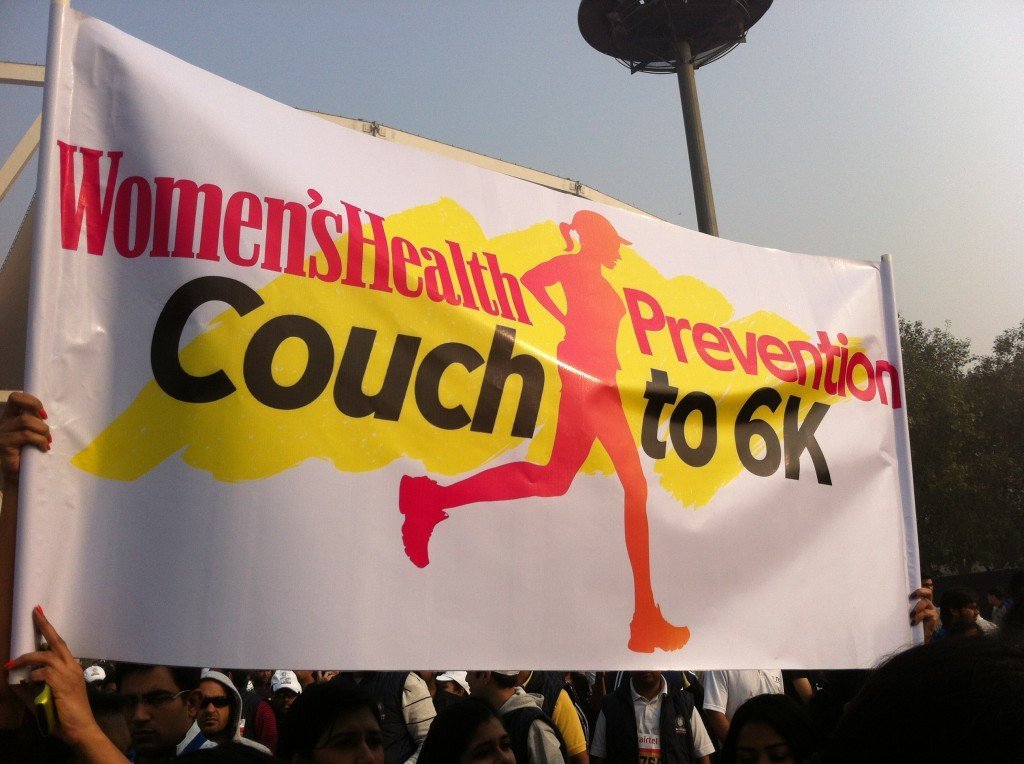 …and this was the male version… 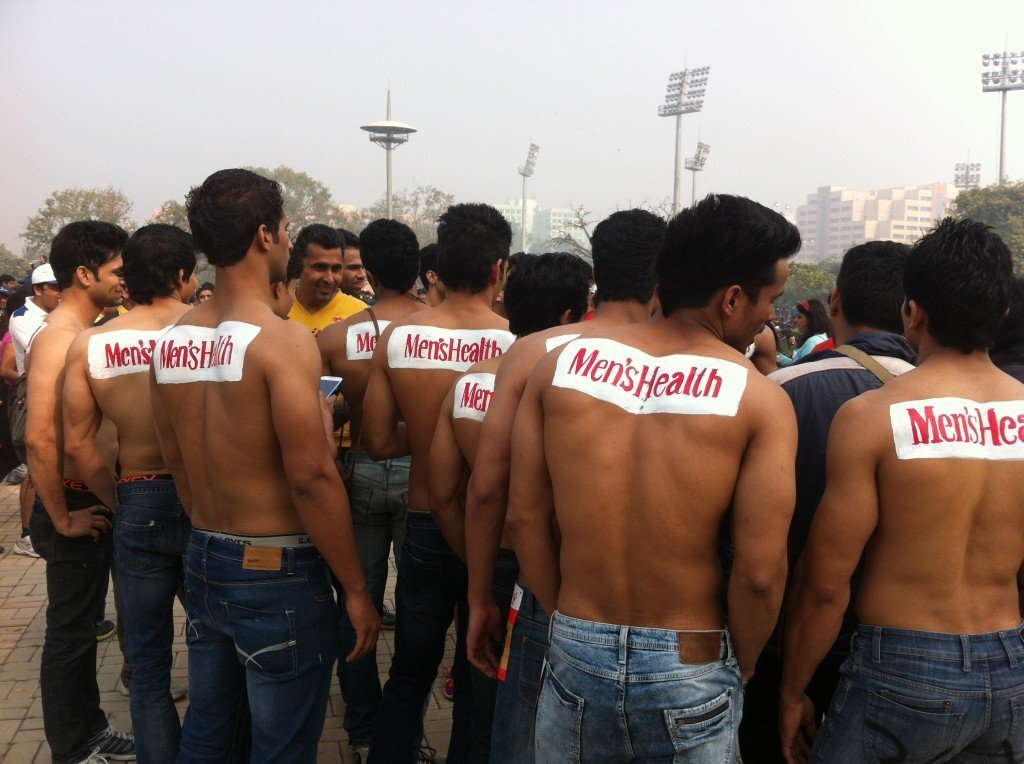 After the race we were treated to a fab lunch by our sponsors at the Ashoka, where we sat on the grass and laughed and wolfed down vast quantities of food. 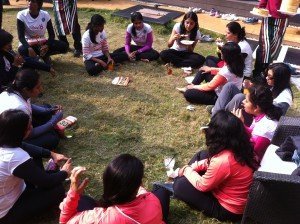 We were also treated to a hand massage.  Doc, our fearless leader, being pampered. 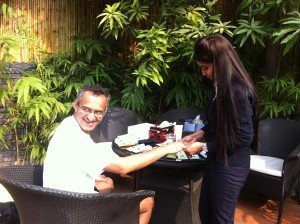 And the girls that made the cut on the Aaj Tak film gave us a sneak peek:

And we are now all gunning for a 10km, and meeting next weekend to continue training.

Gearing up for the Great Delhi Run

I have decided to be a little self indulgent this evening and blog about running. (Hey, it is my blog, so I can occasionally dictate the agenda, surely?)

Sunday, the day after tomorrow, it is the Airtel Delhi Half Marathon and I will be part of it.  And it’s all hugely exciting.  For the last –  what? – 3 months I have been part of a programme called Couch – 6km, intended to get non-runners running. Which is exactly what we are doing.

From a group of women who were not runners in any sense of the word, we are all running as a team in the Great Delhi Run on Sunday –  a section of the marathon.

It’s all been huge fun, and the sense of camaraderie from these young women is amazing.  We whatsapp each other, we Facebook, we have post-training-run breakfasts, we have plans to run a 10km next year – to say we are all motivated is an understatement.

Tomorrow we will have our last early morning practice session together, and get our bibs and Team Couch – 6km T shirts, and work out the logistics for Sunday.  Heady stuff for someone like yours truly who thought running was a thing of the past due to aging knees.  I’ve never raced remotely competitively, so am looking forward hugely to Sunday, though with some 18,000 people taking part in the Great Delhi Run, I’m not sure how much actual running we will get in.  More like shuffling, I fear.

Whatever happens on Sunday, through this new-found love of running, I have made some lovely new friends and discovered new bits of Delhi.

What could be better?