Advance warning that this is going to be a bit of an emotional post.

Probably a bit too emotional, in fact, since it’s written by someone who burst into tears as she crossed the finish line 🙂

It’s also probably going to be a bit too enthusiastic – though to be fair, after such a SMASHING day and a SMASHING event, enthusiasm is 100% called for.

Credit given where credit is due – this first edition of the Delhi HM by new sponsors (does that even make sense?) – was excellently run. Truly well run, well organised, and other than a bit of a struggle to get into the venue early in the morning, because the gate was semi-closed, all went off brilliantly.

Whenever I compare racing in Delhi and racing in Mumbai, the former wins on the flat course, and the latter on the crowd support.

Today was not Mumbai style crowds, which are THE best, but there were many more people out cheering than I’d remembered from earlier years. Which made such a difference.

And the crews at the aid stations, without exception, were great, cheering and “Good job”-ing away.

For the record, I didn’t use any aid stations because (and this was SUCH a game changer for me) for the first time ever I raced with a hydration pack, so I had my water, I had a sticky bag of dates 😛 and so didn’t need to stop at the stations – but the enthusiasm from them, and from the always brilliant crew of the Super Sikh Run, was amazing.

Also, and I don’t want this to be TMI, I didn’t use the loos en route, so can’t report back on them.

The route was slightly different from my last foray – which was a shocking 5 years ago…long story…and we didn’t run down the newly renamed Kartavya Path (formerly Raj Path) but we did run round India Gate which looked AMAZING today, and the new statue of Mr. Bose, and we ran round Connaught Place, which was fun, so absolutely no complaints re the route. The road was a bit dug up in places, but by and large everything was good.

And as for my fellow runners…my dears, please take a bow, every single lovely one of you.

Saw loads of people I haven’t seen since pre-Covid times, and there was the usual “kindness of strangers” syndrome, whereby random strangers urge you to keep going, and that “Come on, keep running!” really does spur you to action.

I was privileged enough to be invited to the Procam Marquee, which is at the start line and so, thrillingly, saw the elites start.

I want you to bear in mind that these elites started at 6.40, just ONE MINUTE before we amateur runners.

But JEEZ…one minute they were there in the holding pen, 100% focused, then they were off, and they were next seen as I was hitting the 6/7km mark AND THEY WERE ON THEIR WAY BACK.

I know I shouldn’t list out special mentions and thank yous since I’m sure to forget names (if I do, please know that I would NEVER deliberately forget a kind soul & just chalk it up to old age!)

I met SO many friends – Akansha Aggarwal, last seen a week ago as we ran the level 3 race of the Indrahar Summit Run together. Well, we started together and then she was off like greased lightening 🙂

For a little while I ran and chatted with the lovely Divya Kapoor, last seen at La Ultra in Ladakh in April. Well, that doesn’t mean we ran together in the mountains, you understand, since she was hard-core, running 55km – but you take my meaning 😛

As I hit the 200m mark to the finish line, the irrepressible Anjali Nayar grabbed my hand and chivvied me along. I didn’t exactly run out of steam at that point – which I usually do, so this was a big improvement for me – but, ridiculously, I started cramping and had to walk for a bit. Then I burst into tears at the finish line, so much so that one kind soul asked me if I was alright 🙂

I then shamelessly photobombed loadsa peoples’ photos – Coach Gagan for one, and I think I might have sobbed over him, dear man.

Outside the stadium, I was greeted by 3 of the lovely crew from Kica Active, whose top I wore for the race, and jolly comfy it was, too. They sweetly gave me a goodie bag with food and drink – now THAT is thoughtful!

I have a nasty feeling that I managed to be walking every time there was an official photographer, so that’s all going to be a tad humiliating 😛

But Jyoti Kumar of Adidas Runners did actually manage to get me in action, on the home straight. So this is kinda proof that I did manage to run a bit:

This was my slowest HM ever.

BUT I am so so SO chuffed to have done it, and more importantly, I loved every single minute of it. I walked a lot, stopped to photo-bomb friends 😛 and I think I smiled all the time.

After illness and surgery and the pandemic and stupid injuries, there I was, taking part in an actual on-ground event after so many years, and having such a good time, and…

…yes, yes, yes, got my timing certificate for the Mumbai Marathon which was the main objective of today’s race. Remember, I told you in yesterday’s post?

And just before I wrap up this over-excited post, one last thing – for once I actually had Race Goals, like the experts say you should.

My A Goal was to run safely.

My B Goal was to enjoy the race.

My C Goal was to finish the race – seriously, I had SUCH a wobble yesterday.

And my D Goal was to finish in under 3 hours, so I could get the qualifying time certificate. 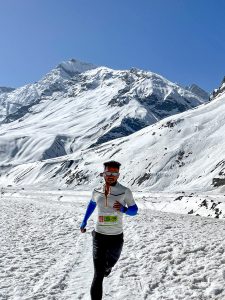