We decided to escape from the annual horrors of the Diwali pollution in Delhi, and so we’re in the Himalayas for a few days, staying with friends in Mussoorie. Last night it poured down, absolutely threw it down. At one point, there was the mother of thunderclaps and the room lit up with the lightening.

We woke up to misty hills and clouds swirling over the trees.

So this morning, when I set off for a short run, it was to a world of misty views, rain-slicked leaves and boy oh boy oh boy, was it COLD.

Thermal beanie and gloves level of cold. Like so 🙂

We’re staying is at 2114 metres, so I felt a tad breathless as I ran, but WHAT a joy to be out in clean air, with very little traffic, and – mercifully – no monkeys. The monkeys wander around with impunity and I had no desire to encounter any of them.

I trotted happily along the damp road, played for a while with a cute puppy, and tackled the slopes with much huffing and puffing.

Then the heavens opened and that was that.

I’ve hardly ever run in cold rain (our Indian monsoon rain is warm) and I am now beyond full of admiration for all the runners in Europe, for example, who regularly run in the cold winter rains.

Hats off to you all!

Let’s hope tomorrow isn’t quite so cold and that I’ll be better acclimatised so less huffy and puffy. 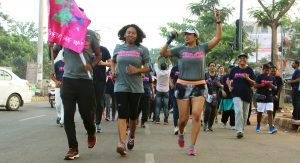