Running on half tank 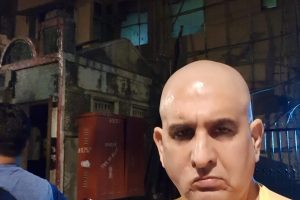 This guest post from the one and only Sanjeev Chhabra is an extraordinary account of a comeback to running, & what a comeback!

Sanjeev donated a kidney 3 months before his half, so the physical and mental recovery involved is truly impressive.

His story is also very funny.

Thanks, Sanjeev, for sharing this hilarious account of your half-marathon last week at the Tata Mumbai Marathon. Onwards & upwards!

I give you Sanjeev Chhabra, in his own words. Enjoy!!

Two days before Diwali 2019, I donated my left kidney to a family member. Exactly 12 weeks and 2 days later, I ran the Mumbai Half Marathon 2020.

This blog is about that.

I have been on the marathon running circuit since 2007. Monikered Barefoot Ferrari by friends, I have done what every runner does, which is – add more challenges, achieve a personal best, gain weight, lose weight, gain speed, lose speed, injury breaks, etc.

The transplant was finalised sometime in July 2019. Our family had many questions to ask the team of doctors. But I had only one question,

“Excuse me. The registrations for the Mumbai Marathon are currently open. Do I go for the Full or the Half?”

Many dirty looks and frenetic messages later, I quietly registered for the half.

The transplant, unfortunately, did not happen in August 2019. There were tests, retests, second opinions, emails to the Doctor Uncle in US, samples going to France and what have you. Finally, on the evening of 23rd October I sent a cryptic message to my office

‘Am finally getting admitted for surgery tomorrow. No visitors allowed. Sorry for the short notice. See you on the other side.’

The last thing I did before getting operated was to lose my Garmin! When they were wheeling me in, someone told me no metals were allowed so I quickly discarded it somewhere. Where, I will never know. Most people who hear this story, instead of empathising with me, wonder what I was doing with a Garmin in the hospital anyway? Was I expecting to run a 10k in the corridors?

Every runner develops the feeling that he or she is super human. Well, to just pick yourself up and run 50km in the middle of a normal life, is definitely super human.

However, one thing I was to learn post-surgery was that I had lost those powers. Looks like the super-humanness resides in the kidney they took – my Left kidney.

Note to self: next time give your Right kidney.

So, I had to start all over again. My daughter had to rudely point out to me repeatedly the sign in my room:

‘DO NOT GET OUT OF THE BED YOURSELF.’

So, I had to learn everything again. It’s as if my body had lost its muscle memory. Getting out of bed was the biggest achievement. First, falling off. Second, minimise the pain in my 5 external stitches and the internal wound. That is an art by itself. Slowly I learned how to walk, supported by my very dedicated wife. And on Day 5, I was discharged.

The Dog Walker and I

I stayed home for four weeks after the surgery. I had promised my wife to follow Doctor’s and her orders strictly. So, I walked inside the house till I was allowed, and soon it was time for the first Outdoor Walk. Per my wife, I could not go out unassisted, so we chose the Dog Walker to walk me right after or before the dog (Lucy). Everyone hid their laughs when the Wife told Dog Walker,

A couple of days with the Dog Walker, I started letting him go as soon as we reached the park. By Week 3, I was into what I thought was brisk walking. Here is when I realised first that my speed was compromised. At my very best I was touching 6kmph walking. I figured it was because I was wearing an abdominal binder. However, whatever I did, I could not walk faster than 9 minutes to a kilometre.

And the Run begins

At the end of Week 6, Doctor allowed me my first run.

“Please start with a small distance, and increase it gradually.”

A ‘small distance’, we all know, is 5km for us. So off I set, only to receive the rudest shock of my life! I could hardly manage one km. I of course stuck to my target, but for some reason, my running speed was less than my Brisk Walking Speed!

Was it the abdominal band, limiting my stride length?

Was it the weight? I was now 81kg. At 5’10”, this was slightly overweight. And for a marathon runner, pretty much overweight.

I will never know. But in the 12 weeks from then to the marathon, I gained another 4 kg., and could not run better than 9 minutes a km, regardless the distance.

Was it the cold? The smog? The medication?

My asthma was at its best, a respiratory specialist at the hospital having put me on a battery of medicines which made my chest clear, and had me forget what wheezing was like!

Was it my footwear? I normally run barefoot. This time, however, to minimise the risk of infection to the recipient (a family member), I decide to run in slippers.

At the Mumbai Marathon

Reaching Mumbai a day earlier, I found instant demotivation by the full marathon. I myself have been a party to infantilising half marathoners. In my defence, though, all I say is,

“You don’t have to fly to Mumbai for the Half. For that you have ADHM.”

Anyhow I got a taste of my own medicine several times during the day.

First, a friend (now ex-friend) who was running his first full, infantilised me. ‘Baby marathon’, I think, is the term he used. Then I found out that there is no Tee shirt for Half marathoners. And none of my regular gang knew anything about the start point or hotels near the start point for the half!

Most of my friends are shocked at my race timings, seeing how slow I run during training. The difference is as high as 1 minute per km., at times. My common answer for that is ‘Race Day Magic.’ Translated, it means that, unlike regular running days, we have no traffic, no household worries, no need to conserve energy and a lot of support.

Well, my day did not begin with Race Day Magic. Reaching on time, I found none of my regular friends, and almost everyone huddled in groups. To top it all, the line to the starting point was just about as bad as Dadar Central at peak hour.

After walking in and out of lanes when I finally did reach the start point, my first thought was:

“Drop it. Turn back. Enjoy a nice breakfast and go back to sleep.”

Exactly the same thoughts I had before my first ever half marathon in 2007!

Life on one kidney does not differ at all from Life on two kidneys. However, running a marathon (or half) needs a little extra care.

I had read up enough to know that I had to take care of two things: 1) Hydration 2) Over exertion

The first part, hydration, was trickier than usual.

Post-surgery, my surviving kidney has been a tad hyperactive. I pee a lot. Not frequently. A lot.

There is just a stronger stream which appears to last longer too. That is one thing I wanted to avoid. We all know what a royal pain it is to take a leak during a (half) marathon. So, I made sure I emptied my tank twice after reaching the holding area (I did not hold). The plan was to use two formulae shared by fellow runners:

The second part (over-exertion) was a matter of judging your own body. I was mentally prepared to DNF if I had to. The intent, though, was to RWC (Run Walk Crawl) to the finish.

I ran a half good race.

The first 10k, on the Sea Link was faster than my training times. After km 12., asthma caught up a bit, so I slowed down to an even pace. Surprisingly, Pedder Road was not the monster it appears to be when you are doing a full.

I comfortably finished at 2:51, almost an hour slower than my PB. Surprisingly I felt no elation. No runners’ high. I did my stretches like every training run, and looked for the Medal Counter.

A line again, as long as Dadar Central. As I grumbled, I looked at a free line at the side.

It was for the Full Marathoners!

P.S. My transplant recipient plans to run the Half next year. That way my kidneys can claim to have run a Full.

Isn’t this SUCH a great telling of an impressive comeback.

Well done on every count.