WHAT a fab run that was! 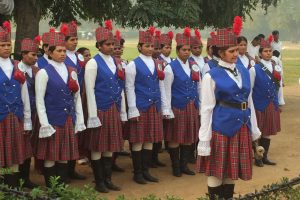 In the 6 years since I started running, from absolute zero, I have clocked quite a lot of miles.

I’ve had some great runs.

Some not so great runs.

And then there’re some runs which stay in the mind and the heart for ever.

Like my solo run around India Gate, 5 years ago today.

In those days I was running alone, no running group, didn’t know anyone at all, and was out pounding the streets for the sheer love of it. But always alone.

What a run that day was…

Right in front of India Gate, military-esque rehearsals were taking place, and I got loudly scolded by a policeman on duty for skulking out of sight, surreptitiously filming.

He peremptorily ordered me to the front, slap bang in front of these fab young women & said “Film!”

As I watched, entranced, the most marvellous thing happened…the girls got competition from a rival band…just watch this clip to the end 🙂

It’s everything that I love about India in one frame 🙂

Plus there were the young ladies in kilts, all neatly lined up under a tree.

Plus the army band jamming…

Small wonder that this sticks in my mind as one of the happiest, funniest, most bonkers runs I’ve ever had…super slow, of course, but WHAT a show!