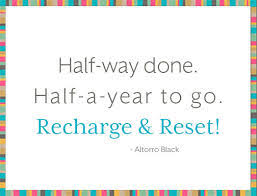 Now how on earth did that happen?

One minute it’s the end of February & I’m telling myself I’ve got the w-h-o-l-e of the summer to unwind, and train, and make major improvements to my running form…

…and then, wham, suddenly it’s the end of June, which means that it is half way through 2019, & I’m getting reminders to sign up for the Mumbai Marathon in January 2020, which is next year and that’ll mean 2019 is gone, and yes yes yes, can you hear the rising panic?!

So in true ex-auditor fashion (God, I used to lead a dull life… 😛 ) it is time for a half-yearly balance sheet.

I’ll stop exclaiming about how quickly 6 months have flown by – though I did watch a BBC thingy about how time seems to speed by faster for we oldies, so perhaps that explains some of my astonishment – but whatever it is, half of the year is done & dusted, and what do I have to show for it?

Not HUGE amounts of progress on the running front, sad to say, since I haven’t really challenged myself since my 2 marathons within a month in January & February.

I ended the winter running season with a jolly 5km in the rain in early March, getting a PB in the process – and that is, ahem. well, kinda that…

I dabbled a bit with going to the gym.

I went on a high altitude trek in the Himalayas, and came back absolutely knackered.

So much for using the long Delhi summer to up my game.

What I have done is travel quite a bit and, naturally, I dutifully ran in all the lovely places I’ve visited.

Yangon, Mandalay, Shanghai, Bangkok all gave me city running, most of it hot and humid, except for Shanghai which couldn’t make its mind up whether it was winter/spring/summer the week we were there.

I did a bit of trail running in Himachal Pradesh, in the Himalayas.

I’ve done lots of slow, gentle runs in the Delhi forest with my 2 dogs.

But if I am to be in ANY shape whatsoever come the winter racing season here in India, I need to get my A into G, and ek dum jaldi.

I don’t know why I do this to myself every year.

I imagine the summer is going to last for ever – which of course it does but it is SO damn hot here that running and exercising become a real chore.

Waking up to 32C every morning at 5am, makes it a tad difficult to stay motivated.

You think I’d have learned by now.

Anyway, onwards & upwards & all that jazz.

My post-Himalayan-trek rest is now officially OVER.

And to kick start the second half of the year, I dutifully dusted off my stationary bike (which sits totally stationary in my bedroom) and I offloaded the clothes that were draped on it 😛 and pedalled slowly for half an hour.