Yesterday I wrote 3/4 of a blog post about running, in which I mentioned feeling discouraged and out of shape and out of sorts.  I didn’t post the post (if you see what I mean) since it wasn’t finished.

This is what I wrote early yesterday :

“Indulge me, while I muse aloud about running in general and this morning’s run in particular.  I am supposedly training for a 10km run this Sunday (another one, not the cancelled race)  – the annual Pinkathon, a women’s only race which should see quite a lot of us from my wonderful gang of running girls meeting up and running together after too long.

But this morning was one of those days when I might just have hit the wall, or whatever the expression is.

Got up, drove to usual place, parked my car, did my stretches, set off to run through the (for Delhi) well manicured and relatively un-encroached upon streets of shady Lutyens Delhi, but  I dunno, heart/mind/body/whatever just wasn’t in it.  Felt tired and out of breath and so I started blaming everything about me, but mainly the heat and humidity.

And then, of course, it struck me.   My bad day, my out-of-sorts run day, my hitting the wall day was, nonetheless, a 7 km run day.

And then I felt a little bit cheered up.

Right, personal introspection over. (Could introspection be anything other than personal, come to think of it? )   Now let me share with you a few other thoughts about pounding the Delhi pavements.

Firstly, early early in the morning is the time to go out, oh fellow residents, if you wish to see pavements and, from time to time, actually get to walk on them.  What is totally encroached upon during the day is sort of available pre dawn. Actually in the uber posh part of Delhi where I run, Lutyens Delhi, the pavements are not encroached upon the way they are on my ‘hood, ie by cars and tea stalls and guard huts and yet more parked cars and yet more guard huts.

No, in smart Lutyens Delhi, the pavements are so tiled and so pillared and so concrete-posted, that you have to keep weaving and ducking to avoid what the city considers to be beautification. 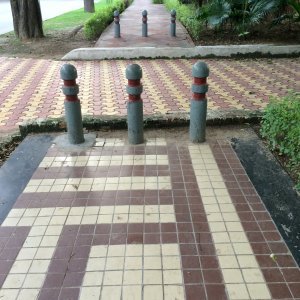 Avoid slipping on the shiny tiles. Don’t trip over the uneven levels. Squeeeeeze through the wretched concrete pillars (and tough if you are in a wheelchair.)

Then of course there is what I call the creeping garden-itis of Lutyens Delhi.  You would have thought the residents of these grace and favour bungalows had enough gardens, but no. As I pound the pavements of this pampered and cosseted bit of town, I spy lots of landscaping of the pavements, which is in theory no bad thing in itself, except when it becomes like this…a little more for the bungalow and a whole lot less for we ***mango people. 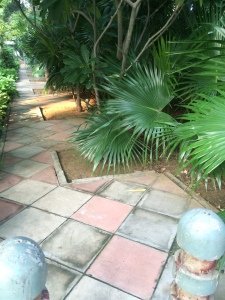 This kind of encroachment is obviously less offensive than the guard hut and car park variety, but it is still swiping the public footpath all the same.  You are left with a tile’s width to walk on…and, once again, tough if you’re in a wheelchair.”

And now, fast forward a mere 24 hours to this morning.

Early morning Delhi was equally sticky and humid (89% humidity if you want to know. I checked.)

Same route, more or less, as yesterday, except that today it was a case of God’s in his heaven and all’s right with the world.  I ran (I also speed-walked a lot), I felt tired and hot and sweaty and thirsty, but unlike yesterday, no feelings of wall-hitting.

Wonder if it’s because I’ve started reading a motivational book about preparing for a marathon, in which one is exhorted to embrace pain (I’m paraphrasing, of course), and they use the example of knee pain.  Apparently you are supposed to feel positive when your knees start hurting, since it’s evidence of your body working (I’m paraphrasing Mark II, of course).  So when my knees started hurting, I tried telling myself it was a good thing…

Or perhaps it was because it is such a treat to run down empty roads at dawn, knowing full well that in a few hours they will be choked with noisy, aggressive, honking drivers.  This is Raj Path, leading to Rashtrapati Bhavan (the President’s Palace).

Bar a couple of other runners,  and some pigeons, it was mine, all mine.  How fabulous is this? 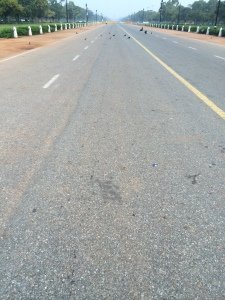 Or perhaps it’s the relaxed nonchalance of the iconic India Gate at dawn : 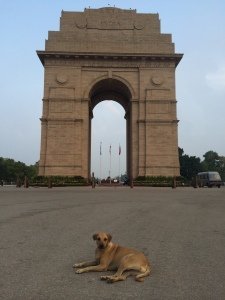 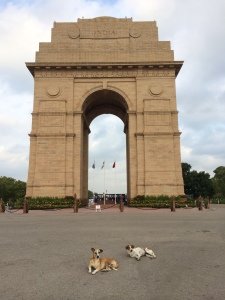 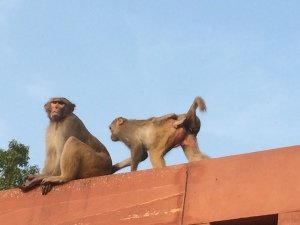 or, quite possibly, it’s the truly puzzling sights you run past… 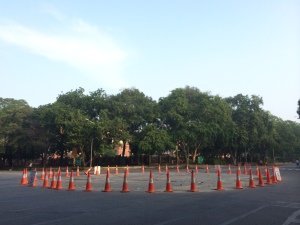 Whatever the magic combo, this morning was brilliant.  (And I’m still embracing that knee pain…)

***You do remember the expression “mango people”, right?  A translation from the Hindi “aam admi”…here you go, read this explanation.